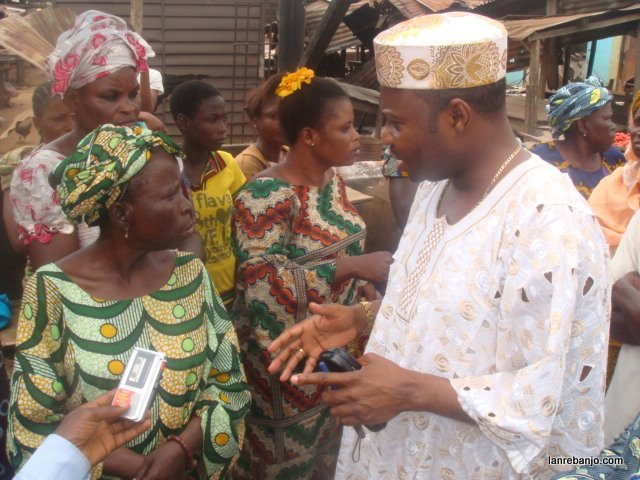 In an interview with TEMITOPE OGUNBANKE, Ogbeni Lanre Banjo speaks on the Muhammadu Buhari administration, state of the nation and insecurity, among other issues…

As a member of the All Progressives Congress (APC), how would you assess the governance style of your party?

I will like to quote my brother, the Minister of Power, Works and Housing, Mr. Babatunde Fashola, who said: “May our loyalties never be tested.” If in bondage of destiny, mine is tested, I will prefer to remain loyal to Nigeria, my future, the future of my children and of course with the interest of my principal at heart.

Why? President, governors and all elected officials will go one day and political parties can be dismantled anytime but whatever we make of Nigeria will stare all of us in the face. I laid that premise because this is not about my party, it is about Nigeria.

We need to rethink our strategy. It ought to start with the citizenry. If we sit there thinking that someone will bring us material positive changes in our lives without forcing it, our sufferings and smiling will continue unabated.

The President means well, but most of the governors are not doing their best. They are creating more problems for the future of our children than preparing better future for them. They do not allow local governments to function as they should and as designed by founders of democracy.

Local governments are supposed to be laboratories, where those running them are expected to be given unbridled opportunity within the ambit of the law to prove their best to enable citizens to detect talents that should be promoted to state and federal arms of government.

That is not so in my great country, where governors arm-twist and impose nonentities based on loyalty to them and not on competence and loyalty to the country. I wonder how the best of President Buhari can affect the lives of our people promptly, when Nigerians in positions keep lying to those at the helm of affairs, be it chairmen of local governments, governors or president to prove destructive and sycophant loyalty. And these leaders, based on lies, remove the wood necessary to ignite passion from the fire.

Those praying for change in Nigeria need to triple their efforts and be ready to just pray without their supplication being heeded until they return to the bosom of their Lord.

The mantra of change was used by APC to get to power, would you advise Nigerians who are beginning

to lose hope to be patient with the current administration? Patience is a paragon of virtue. But let me ask, if you are on a hospital bed feeling an unbearable pain, and a doctor assigned to you is walking up and down, either appearing to be or actually working to get you antidotes, would you remain in silence demonstrating that virtue until you give up the ghost?

If you continue to exercise patience, how would the doctor realise that you need urgent care? One of the puzzling acts of Jesus Christ, which is actually a symbolic indictment on the apostate nation of Israel, was when he cursed a fig tree because he was hungry.

What Jesus did was to symbolically curse the nation’s lack of spiritual fruit. This nation lacks that spiritual fruit for which Jesus cursed Jerusalem. Our nation is endowed with oil, yet our leaders and those connected with power are making us to suffer.

Nigeria is endowed with many talented citizens, yet we ignore them to pursue ghost in foreign countries. that allow their citizens to use their talents to develop and then sell to us because we refuse to use the abilities we are blessed with. If Nigerians believe docile patience is not working, they need to patiently speak out and protest.

Of course as I said earlier, we, Nigerians need to x-ray ourselves with a view to determining our deeds that complicate matters for the country. We cannot be praising looters and murderers among us and think President Buhari and others who meant well will be encouraged to fight corruption.

How can someone who presents himself as a follower of Christ say that former President Goodluck Jonathan should not be arrested if he is deemed an accessory to corrupt practices just because he handed over power for his own sake or because of his religious affiliation? Did he think about the preaching of Jesus Christ when he allowed all those who ran Nigeria aground to mismanage our resources?

What is the big deal in a sane and normal society, if someone loses election and as required by law, he hands over power? Under his watch, those he assembled to help us, ruined us and a group claiming to be followers of Jesus threatened that hell will let loose if Jonathan is arrested.

Jonathan created and encouraged what Jesus the Christ referred to as “den of thieves” and the law is after them and a group is saying the leader of those thieves should not be arrested. That is anti-Christ in my humble view.

What do you think the APC government can do to ensure that it fulfills the change it promised Nigerians?

If Nigerians have to struggle to generate power for themselves, maintain their own roads, practically perform the function of a local government, and now you get on the road, we are further frustrated by police who often require you to show the chassis number on the engine of your vehicle when each car has Vehicle Identification Number (VIN).

Customs on its part would ask you to produce customs papers for vehicles registered before I was born. I think if this administration establishes rules and regulations to stop this nonsense; people would begin to feel the change we all voted for.

If the members of the National Assembly or even Houses of Assembly in the 36 states make it illegal for Customs to ask for papers of registered vehicles, we would be begin to feel the change. We only water corruption when we allow Customs officers to stay on the road to collect bribes because of vehicles papers.

An arrangement that simplifies the registration of businesses at the local government level instead of going to Abuja will make Nigerians feel some changes. These are rudimentary changes that government can quickly establish for Nigerians to feel.

To export food out of the country, the Police, Immigration, Nigerian Agency for Food and Drug Administration and Control (NAFDAC and Customs have roles to play just to frustrate and encourage corruption that the administration is fighting against at the national level.

These are prerequisite changes that can be established. Since we are all Nigerian citizens and we only cede our rights to those in position of leadership because all of us cannot occupy those elective positions, we must exercise our rights to protest if we feel any pain resulting from government’s policies.

There are many policies that the Federal Government simply arrogates to itself that really need to be devolved to the states.

What is your take on the recent attacks by Fulani herdsmen across the country?

This issue goes to the core of federalism and I pray that Nigerians will not weigh down President Buhari because of unnecessary pressure and I also pray that the President himself sees reasons with the practice of true federalism, so that every Tom, Dick and Harry would not continue to blame him for all the vices in Nigeria.

I agree with Governor Abiola Ajimobi of Oyo State and a few governors who had spoken against the commissioning of grazing areas but I do not hear all of them proffering solutions.

Fulanis are citizens of Nigeria, who have the right to move about and do their business in a legitimate manner. If you are coming to my state to do business, you must be ready to obey the state laws.

No one should goad cattle on the road, on somebody else property or in an open grass, not to talk of Ikorodu road. We do not need President Buhari to think for us on every issue. The states Houses of Assembly should be able to take the bull by horn, establish laws and create a means for enforcement if they are determined to protect the citizens.

What is your take on Governor Ayodele Fayose of Ekiti State warning that Fulani herdsmen should steer clear of his state or risk death for their cattle through poisoning?

Governor Fayose may be seen as brazenly crazy and a lousy governor but I tell you taht I have seen where a mentally ill person drew the attention of the public to someone who was supposedly dead and buried but still alive.

What Fayose is saying is simple; this is my state and I have the duty to protect my citizens and I will protect them by any means necessary. Fayose is simply saying I am not Governor Segun Mimiko of Ondo State under whose watch Chief Olu Falae was kidnapped by Fulani herdsmen and his security guard later killed and the governor called on the president.

Fayose is saying I am not Governor Ifeanyi Ugwuanyi of Enugu State, under whose watch, scores of my brothers and sisters were killed and he and other South-East governors regard it as a national problem and expect President Buhari to solve it.

Fayose is saying I am not Samuel Ortom of Benue State, under whose watch Agatu people are being wiped out and he is expecting Buhari to come and help. If we have governors like Fayose, true federalism will probably be achieved.

Now, the Federal Government is winning the war against Boko Haram but are we sure Boko Haram is not changing strategy by using herdsmen? Have we ever wondered why these herdsmen are so bold, moving around with rifles that average people cannot afford?

Where are they getting this weapon from? If I were a governor, I am not going to wait for Buhari to come and protect those who will and may not vote for me. These are citizens that I am vested with the power to protect.